Typolar® Ty® Typolar
Fonts Custom Type Licenses About Cart
F Fonts
C Custom
L Licenses
A About
S Cart
In short The Finnish National Agency for Education has announced a recommendation for a new handwriting system to apply in comprehensive schools in Finland including sample letters, numbers and other characters. The new system was put into use August 1, 2016 in all comprehensive schools in Finland as the new curricula were implemented. The Alku Handwriting System is suitable to apply on any language using the Latin alphabet. Fonts created based on the system bring the new letterforms to the use of schools and publishers. By Finnish National Board of Education Edited by Jarno Lukkarila 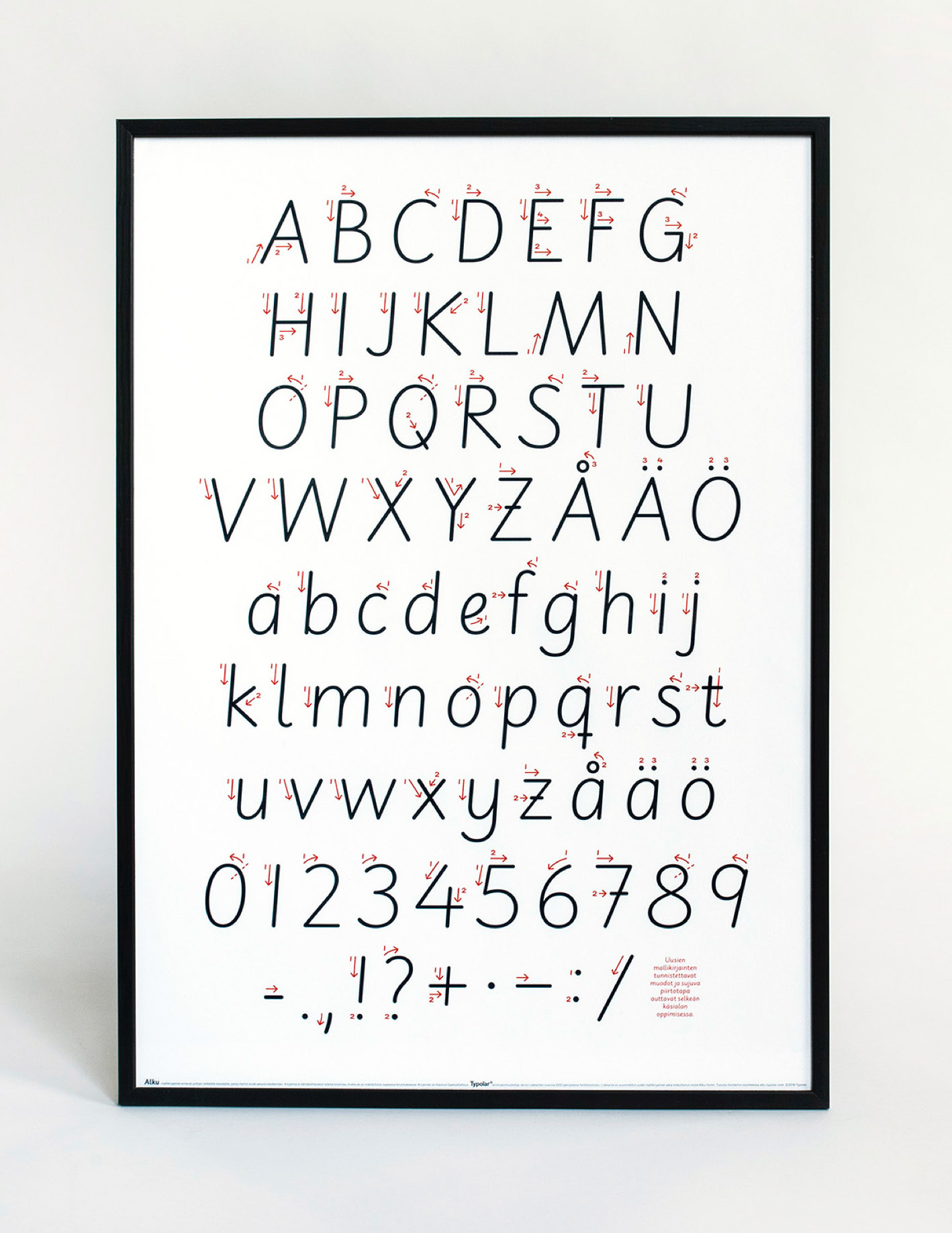 The new handwriting system was introduced due to changes in the ways of writing. Keypads and terminal devices have significantly reduced the scope of handwriting, and high school students have been noted to mainly use print letters when writing by hand. For these reasons, the 2016 handwriting system consists of just one character set of print writing. It is to function as the first step to learning handwriting and later as a base to develop one’s own fast handwriting style.

Stroke directions established in teaching handwriting in Finland. Letters A, M and N are written upwards from the baseline with as few pen-lifts as possible. K and Y are drawn with two strokes. Calligraphic way of writing in grey. 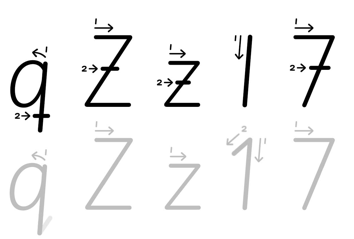 In mathematics and physics, the crossbars help make a difference between characters. The brimless number one complies with the way of writing recommended by official voting locations in Finland.

The new system is based on Nordic cooperation on handwriting in schools that took place from 2002 to 2004. It originates in the cursive form developed to write Romanic languages that allows producing text as efficiently as possible without many interruptions caused by lifting the pen off the paper. Over the years, this style of writing has been established with many different letter variations and ways of joining up letters.

Changes in the handwriting system

The new handwriting system favors practices that have been established as part of teaching handwriting in Finland. These include the directions to draw letters A, K, k, M, N and Y, the “brimless” form of number 1, and the crossbars in letters Z, z, q and 7, although they differ from the practices of western calligraphy.

The handwriting system has been modernized by simplifying the forms of the letters and by making it easier to draw the letters fluently. Although the letters adapt to each person’s style of writing, the basic rules of writing must always be followed. That makes writing fluent and the text understandable and readable. For example, the non-interrupted way of writing letterforms, their starting points and stroke directions have been established during decades, and there is no reason to change them. For the same reason, the size and baseline position of letters must remain correct.

A sight slant to the right increases the fluency of writing, especially for the right-handed. The slant may be challenging for the left-handed, and that is why the letters can be written completely vertically or even slightly slanting to the left. Teachers should make note of the position of the sheet of paper as well as the pencil-grip so that the writer is allowed the best possible visibility to the letters and the paragraph they are writing.

The Alku Handwriting System has been guided by feedback from teachers who have noticed difficulties in children’s learning. In addition to adjusting individual letterforms and stroke directions, untied loops, for example, have been prevented by placing starting points lower in relation to the baseline and x-height. Spreading the letters has been prevented by making the samples more narrow than before. In letters R and S and in number 8, the upper part of the character is smaller than the bottom in order to balance the form. These kind of features have been pronounced on purpose in order to transfer the correct dimensions to everybody’s personal style of writing.

Non-interrupted writing means that the pen is not lifted off the paper within one letter. This is how we write most lowercase letters, with the exception of k and x, for example, and the letters that contain accents or crossbars. Curvy letters now start lower below the x-height line.

The slant must remain the same within one text although it may differ among writers. For the right-handed, it is natural to slant writing to the right, but for the left-handed, it may be easier to write vertically or even slanting to the left.

Joining up the letters is no more required

The challenges of handwriting have essentially concerned learning to join the letters and the necessity of joining up regarding modern practices. However, letters join up naturally when writing by hand rapidly. Letters are written without interruptions, which supports spontaneous joining up of letters while becoming a faster writer. In order to ensure fluency, letters e, l, t and y, for example, respond to the cursive style instead of print writing style. Joining the letters with each other is acceptable if it supports the rhythm and fluency of writing or helps the writer to keep to the baseline, to write in a more relaxed manner or to balance spacing. The letters are always joined from the ending point of the previous letter to the starting point of the next letter.

If joining-up is going to be practiced, the student must first know the starting point of each letter and have established stroke directions. After this, the student can be guided to replace the blunt end of the letter ending on the baseline with a curved ending. This way, when writing, the line is easier to connect to the following letter that starts more up (in the same manner the upstroke of the letter u combines two vertical strokes). This kind of fine-tuning may be one way to develop handwriting in the later grades of elementary school, but it is challenging for a beginning writer during pre-school and primary education.

The letters are not joined up because of aesthetic reasons but to make it easier to write rapidly. Joining-up only happens with the letters that join naturally, and its purpose is not to produce ribbon-like unbroken writing. Thus it is recommendable to let the letters be joined only after handwriting has stabilized and started to gain speed. Capital letters and numbers are not to be joined up. 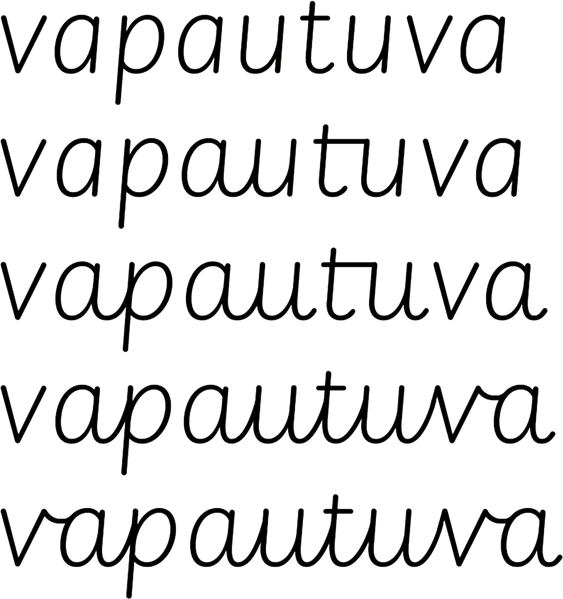 When writing rapidly, the letters start joining where the connection can make the hand move faster. For example, letter t can be connected in two ways. Joining from the crossbar suits the sequence of writing better, but joingin from the tail is often prefered in teaching due to heritage of joined-up style.

Handwriting system as a base for personal idiom

Handwriting requires skills and accuracy due to the versatile yet often also similar forms of the alphabet. Geometrical uppercase letters (such as A, B, C) require straight strokes and even curves, while with lowercase letters (such as a, b, c) the writer must remember where to start the line and which way draw as well as when to lift the pen in order to keep the letters in their form and understandable. One can only learn these by practicing, and teachers have a central role in correcting the size of letters and the direction of lines.

When learning one’s own style of handwriting, it is important to make sure that different letters remain identifiable and distinctive. One must learn to write the letters as close to the original sample as possible and analyze one's handwriting to identify problems. Typical stroke direction mistakes should be corrected immediately in the beginning of training so that they will not disturb further development.

One’s own handwriting style develops by practicing. It does not need to be an exact copy of the sample but it must follow the rules of the system. The more accurately the system is followed, the more readable the handwriting will be. After learning the basics, one can bring in personal manners. An experienced expert of handwriting, particularly that of children, Rosemary Sassoon said: ”A model is an aid to be used only as long as it is necessary before being discarded.”

Alku fonts in use on a school book for 7 years old students, Otava 2016
©2019 Typolar Ltd. All Rights Reserved. Typolar holds rights to all material at this website unless stated otherwise. Logotypes are property of their respected owners.
Cookies

At this website we use some first party cookies, that are mandatory for our websites performance. Functional cookies make your experience fluent by enabling features like shopping cart and saving user setting during your session. Analytics cookies collect essential data about how many visitors use the website and how it is used. The data we receive from cookies is anonymous and it is saved upto two years. We are not using third party ‘tracking cookies’ for marketing retargeting.

Some contact information is collected, when either subscribing to a newsletter or acquiring our products. This is needed to make product licenses and delivering goods correctly. All personal information is handled according to EU’s data protection laws (GDPR).